Charlie, our honeymoon baby (who was 100% planned), was born April 27, 2011. My pregnancy was very normal and rather easy until early April. I was swollen and pretty much puffy all over. On April 26th we went to a regular 38 week appointment. The doctor told me my blood pressure was high, diagnosed me with pre-eclampsia and sent us to Labor & Delivery. We hung out in triage for a few hours while they pumped me with fluids and watched heart rates for mommy and baby. I thought I was going to be sent home until a nurse came in and informed us I was being admitted and that they'd induce in the morning. This was scary, scary to us because we didn't have a bag packed and certainly didn't plan on having a baby that day. I'll speed up- I was induced at about 8am, failed to progress and his heart-rate kept fluctuating, so he was born via c-section after 7pm. He was perfect.

The next day the hospital pediatrician came to visit. He said Charlie had a heart murmur and they needed to do an echo on him to find out more. After they had done the echo that pediatrician came back in and asked where my husband was. I told him he went to get lunch and he said he would wait for my husband to return before talking to me. My heart sank. If everything was okay, he would've just told me.

When Tommy came back, we were told our tiny baby boy had a heart defect and would probably need surgery before he was 6 months old. I sobbed uncontrollably the entire time he was talking. He brought no information other than the fact that my baby had a large hole in his heart.

After our extended stay in the hospital (5 days), we went home and began our life as a family of 3. We contacted AI Dupont Hospital in Wilmington, DE and made an appointment for Charlie. They did all the tests and agreed with what the pediatrician at the hospital had told us: Charlie had a large Ventricular Septal Defect (VSD). In the weeks following, we met with the surgeon and scheduled the surgery for late June- Charlie was only 7 weeks old when he had surgery. There's absolutely no way I could ever describe the feeling I had walking my itty bitty boy down the hallway and handing him off to the anesthesiologist. I have no idea how long his surgery was, but it was long enough to eat breakfast, lunch, and almost time for dinner. It was the longest wait of my entire life. When he came out of surgery, a nurse came to get my husband and I. We were only allowed to see him for a minute because they still had to clean him up and and they didn't want us in there long.

They tell you it's going to be bad, that he'll look awful and all the things he'll be hooked up to, but you just can't prepare yourself for something like that. My mom took this picture much later in the day when they allowed the grandparents to visit him in CICU. 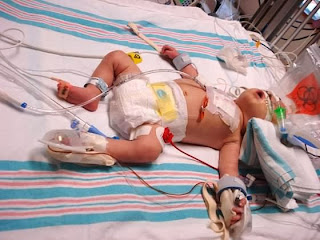 He looks 100000x better in this picture than when Tommy and I first saw him. I thought it was weird to take a picture, but my mom said that some day, we'd want it. Some day, we'll need to and want to explain to Charlie how he got that scar on his chest and how incredibly strong he is.

My baby is a miracle. He fought hard in CICU. We weren't allowed to be in there long. We had to stay quiet and not touch him. Every time he heard our voices or felt our touch, his heart rate would jump up again. 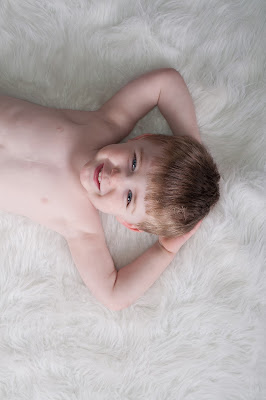 This is that tiny little baby now! You can see his scar, but it's becoming less and less noticeable. One day, we'll get to explain this all to him. That day will probably come the next time we go to his cardiologist. It still seems crazy to me that my little boy has a cardiologist, but she's amazing and we love her. At our last appointment, Charlie had just turned 2 and we don't need to go back until he's 4! So exciting! If you didn't know he had major open heart surgery or see his naked belly, you'd never know! He's my crazy, smart, strong, stubborn little miracle boy!

About 8 in every 1,000 babies is born with a heart defect. If you'd like to learn more, please check out Kids Health from Nemours or Congenital Heart Defects on facebook.

Christina Shirley is a participant in the Amazon Services LLC Associates Program, an affiliate advertising program designed to provide a means for sites to earn advertising fees by advertising and linking to Amazon.com.